Aviation has had a long interesting history, from when the first kite was invented in China around the 5th century BC, to today’s attempts by Space X to build a rocket to Mars.

Humans donning flying wings has ended in many tragedies. Men have tried to jump from towers wearing winged contraptions, but since they did not understand life, stability, or control, they failed. It’s believed that around the 6th century in China and Japan, there were man-carrying kites for civil, military, and punishment purposes.

Hot air balloons were also designed by the Chinese around the 3rd century BC. Originally, these were smaller lanterns that merely held lights for festivals. There is still one example of the oldest exist flying device for humans in a Vienna museum. It consists of a white circular balloon and blue basket that were constructed in 1796. These hot air balloons were successful in the 18th century due to the discovery of hydrogen gas, and the hot air balloon. 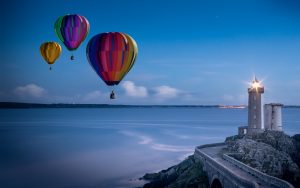 One of the first airships was designed in France. It was unmanned, and flew around the Eiffel Tower for 23 minutes, with the use of an electric motor. The downfall of earlier airships was that they were merely toys, and too frail for human flight. The Germans solved this problem in 1899 with the building of the first Zeppelin. It was 420 feet long, and it was powered by two Daimler engines. It was balanced by a weight between two nacelles. Its first flight was only 18 minutes, as the balancing weight broke. Airships were used in both WWI and WWII. They are still flown on a limited basis today, usually for promotion, after the invention of airplanes and jets.

Sir George Cayley has been called the “father of the aeroplane”. He was able to understand the principles of aircraft that were “heavier than air”. He studied the physics of flight, and went on to design the first heavier-than-air aircraft. He went on to successfully design a governable parachute, which first carried an aviator across Brompton Dale in 1853. 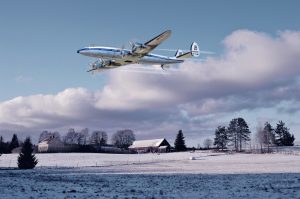 It’s no surprise that during the age of steam, many inventors harnessed the power of an aerial steam carriage to get people into the air. Many of these were merely for show but Alphonse Penaud was a Frenchman who created a monoplane in 1871 that he was able to successfully fly for a distance of 130 feet.

The Wright Brothers advanced flight technology by solving some of the problems of flight control. They invented a wing warping for roll control, and a simultaneous yaw control with steerable rear rudder. They also designed and built a low powered internal combustion engine. One of the most famous flight photos is of Orville Wright who flew a plane up to 120 feet in twelve seconds. Wilbur Wright also flew 852 feet in 59 seconds. 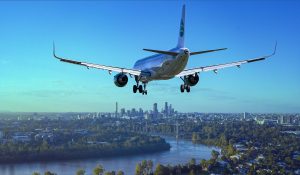 Airplanes were used extensively in WWI from 1914 to 1918. After WWI ended, there were some major advancements in aircraft technology. They evolved from low powered biplanes to sleek high powered planes made from aluminum. WWII saw much more advanced aircraft and directional rockets for small targets. Helicopters were added to these aircraft advances.

The first commercial jetliner flew on July 27, 1949, and ensured the success of passenger flights into the 21st century. Space flight became a reality in the 1960s. In 2015, André Borschberg flew the first solar powered aircraft. It will be exciting to see what advances are made in aircraft and spacecraft over the next decade. Is it possible to fly humans to Mars?

Can I Pack an Electric Shaver & Beard Trimmer in Airplane Luggage?

It Takes Only Ten Minutes to Clean Aircraft Between Flights